“When are you going to start writing for my paper?”

This simple question posed to me by Jim Washington, then publisher of the Dallas Weekly at the end of a meeting about his radio show, has changed my life in so many ways.  It was early 2000 and we were chatting about ways to improve his morning show on 89.3 FM KNON radio. I had just started as the News Director, and he was one of the show hosts for the morning talk shows that were a part of the revised lineup.  I had only met him a few times from my work at previous radio stations, but I thought he would be a perfect fit for the show as our focus was on spotlighting community leaders. Initially, I was taken aback a little by his question because we’d never really talked about my writing for the paper.  However, what he didn’t know is that I’d been thinking about doing some writing for the African American press but just had not had the courage to approach any.  I saw his question as the writing challenge that I’d been looking for. 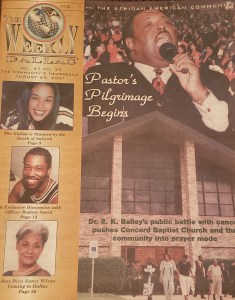 Another thing that Mr. Washington did not know when he asked me to write for his newspaper was that since I’d been reading the Dallas Weekly from the time I’d moved to Dallas in 1996, I’d always wanted to write for it but had been too scared to ask for a chance.   I’d always been impressed by how it represented Dallas’ African American community.   There were engaging stories about politics, church, education, and entertainment that gave a new resident like myself glimpses of the best parts of Black Dallas.    I’d even had a brief conversation in the late 1990’s with former editor Roland Martin about writing for the Weekly. But I never followed up with Martin.    So, when Mr. Washington asked that question, I considered it a second chance and was not going to squander it.

This time I followed up.    Within a few weeks, I submitted my first columns.  They were accepted and now twenty years later, I still consider it an honor to be a part of The Dallas Weekly family as a columnist. In those years, I’ve been copy editor, Managing Editor, writer, and columnist.     Each of those positions with the paper have allowed me to further develop my writing in ways that I’d never imagined.    When I was Managing Editor, we covered national stories like the aftermath of Hurricane Katrina re-election of George W. Bush.  We also delved into local issues like the controversial “Whites Only” water fountain sign and community events like Kwanzaafest.   Covering stories like these from the African American perspective allowed us to provide a more comprehensive point of view that differed greatly from the mainstream press.  I also got to do fun stuff like advance screenings (Including interviewing the stars!!!) for movies like Ray. I remember when we did the question session for Ray, I got the chance to ask Jamie Foxx about how his musical background influenced his portrayal of Ray Charles.   The other reporters at the session were not familiar with that part of Foxx’s background as a few sighed impatiently when I asked that question. However, when Foxx said he appreciated the question and enthusiastically shared his classical music training, I peeped at those same reporters looking a little confused out of the corner of my eye and thought “That’s how we do…. the Black press. We ask better questions.” 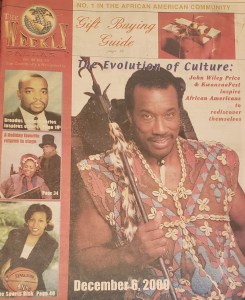 By writing for the Black Press, I can explore issues like politics, economics, spirituality from a decidedly African American perspective. What does that mean?    When we covered the aftermath of Hurricane Katrina, we didn’t present those displaced by the storm as “refugees.”  We shared stories about how they deserved dignity and respect.    Regardless of what they experienced, they were entitled to telling their stories of survival and triumph over the natural disaster.    Moreover, when we looked at the 2004 election of George W. Bush, we were able to look at how his reelection would impact African Americans economically and politically.   In terms of spirituality, we have been able to cover the deaths of highly respected pastors like the late Dr. E.K. Bailey of Concord Baptist Church and the late Rev. Dr. Jerome E. McNeil, Jr of Christian Chapel Temple of Faith CME Church. Rather than briefly mentioning their deaths, we were able to show how as religious leaders they touched the lives of their members but also those in the larger African American community.

“Writing is a way of talking without being interrupted.”  This quote by Jules Renard is one of the best explanations of why it’s been a privilege writing for the Dallas Weekly and the Black Press.  We can write our stories without the fear or frustration of our words and our intentions being changed by those who do not understand the complexities and beauty of the African American experience. 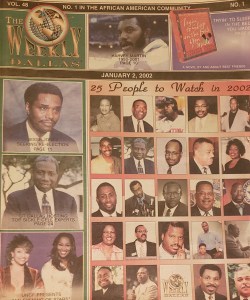 Happy 3500th Issue and May God bless many more!

Culture. Current. DW is here to be the leading voice for Black social and cultural news in the South.

Dallas Residents Push Back Against Unchecked Spread of Dollar Stores

By Catrina Satterwhite
With the New Year approaching, here come the resolutions. A popular resolution is of course getting our health and eating

Owning a Home: Guidance from Your Local Home Lending Advisor

Are you considering buying your first home, but unsure where to start? Purchasing a home is one of the biggest financial

By Steven Monacelli
Dozens of West Dallas residents rallied on Tuesday, December 14, to demand the shuttering of a shingle factory that

Get Your Copy Today

Destiny Washington is an experienced and versatile actress from Dallas,

Big business greed is leading to us downplaying just how

The Legacy of MLK: How Its Been Whitewashed

The Life and Works of Sidney Poitier: A Man Who Broke Barriers

Destiny Washington is an experienced and versatile actress from Dallas, Texas and is no stranger to

Big business greed is leading to us downplaying just how big of a deal COVID is.

For every Black school that is heralded and remembered, however, there are schools that have been