A report commissioned by Mayor Eric Johnson about the Dallas workforce released in November revealed only 40 percent of jobs in Dallas pay more than $32,000 — significantly less than the “family-sustaining wage” of $42,000 or more identified by the report — and that Black workers hold just 15 percent of those jobs despite making up 25 percent of the population. This job and income inequity is a part of a broader constellation of racial inequities solidified over decades of slavery and Jim Crow oppression that persists to this day despite significant federal, state and local reform.

As the City of Dallas continues to engage in conversations regarding racial inequity and what can be done from the perspective of local government, a nonprofit organization called OneTen is hoping to tackle the issue of racial wealth inequality from the perspective of the private sector. To achieve that, OneTen has built a network of employers, education and training programs, and community organizations who work together to address the various barriers that limit the access to opportunity for Black job seekers.

OneTen says 79% of family-sustaining jobs in the United States require a four-year college degree, a credential 76% of Black adults in America lack. This is a massive barrier that keeps Black families from accumulating wealth. It isn’t one that Black families face exclusively. Nationally, 66% of White adults in the workforce lack a four-year degree. Yet Black families have $155,000 less net worth than White families, reflecting the barriers to developing long term family wealth that are particular to the Black community.

OneTen sees this in large part as a problem of unnecessary credentialism and does not believe pushing for more four-year degrees is the necessary solution. Rather, OneTen advocates for employers to shift focus from credentials to skills and replace four-year degree requirements with clearly defined competencies that will open up new pathways for employment. They estimate that 4 million jobs could be re-credentialed to remove the four-year degree.

To date, OneTen has secured buy-in from 57 major employers and 53 education and training programs across the nation. In the Dallas area, 25 employers have agreed to eliminate college degree requirements from family-supporting career opportunities. They will work with OneTen to connect prospective employees who face barriers to employment with community partners who can provide additional assistance such as childcare.

The CEO of OneTen, Maurice Jones, spoke with DW about what OneTen is doing nationally and locally to achieve the bold goal of hiring or promoting one million Black individuals who do not have four-year college degrees into family-sustaining careers over the next 10 years.

“You cannot address the wealth disparity in this country without quality jobs being a strategy that you pursue aggressively,” Jones said. “We’re not trying to pit skills against degrees. What we’re saying is that there are multiple pathways to getting the skills that you’re looking for in the workforce.” 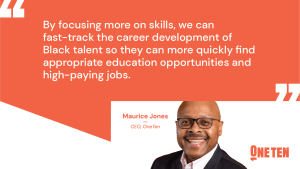 Jones laid out the example of the growing need for capable computer coders. “Instead of focusing on credentials, a company would focus on the skills needed to do the job. We would work to match them with coding boot camps and other organizations who can help them find Black talent. And that prospective talent might need childcare, so we can help them with that as well.”

In 2021, OneTen measured 17,000 hires and 4,000 promotions toward their goal of one million Black individuals with a family-sustaining career. As their coalition of employers grows so will the employment numbers. It’s a likely scenario. Many companies have taken more aggressive steps to promote a diverse and inclusive workforce in the wake of the deaths of George Floyd, Brianna Taylor, and many other Black lives. And many employers are trying to hire as fast as they can.“

We’ve got 10 million jobs open around the country. Not only do we have unfinished business, but we are leaving so much talent on the sidelines because of self-inflicted wounds,” Jones said. “I think we have a unique moment where there’s a recognition of the need for the private sector to do more to make their workplaces more inclusive and diverse and to do more to help the country to become a more perfect union.”

DALLAS FORGOT pt.2: A town, a cemetery and a school: Dallas’ history of erasure repeats itself