A meeting of the Dallas Independent School District Board of Trustees this past March provided a striking illustration of the deep political divides that have manifested around education policy in the state of Texas amid an increasingly pitched culture war over racism and trans rights.

A handful of anti-CRT activists, some organized by an out-of-town group, were ultimately drowned out by a few dozen DISD teachers and nurses with the American Federation of Teachers union.

The first sign of what would unfold at the meeting that evening was immediately visible upon entering the parking lot of the Dallas County Schools building in Buckner Terrace. Just outside the gate, a handful of activists with the right-wing group Save Texas Kids wore matching shirts. They held signs that read “Say No to WOKE Administrators” and “Say No to Radical Sex Ed.” 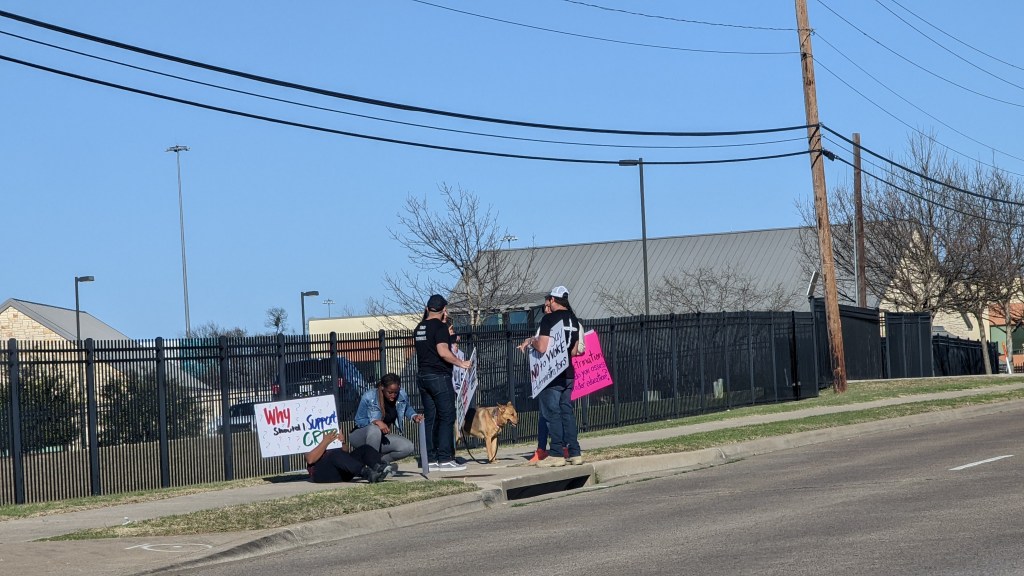 Save Texas Kids made headlines back in September of 2021 when I was the first to report on the mass email from their founding leader Natalie Cato to DISD teachers. The email fear mongered about “radical politics and weird theories” and encouraged them to snitch on any of their colleagues they suspected of promoting so-called “critical race theory” and “predatory gender fluidity.” Nothing of significance came from the campaign.

By February of 2022, Cato — who does not reside within the school district — was out of the picture. She’d been replaced by Riene Washington — a woman who also does not appear to live within the district, according to public records — who has recently appeared at multiple school board meetings across the area, including in McKinney the night immediately before the meeting in Dallas.

“I ask as a parent, are you going to implement anti-CRT legislation?” Washington asked the board during her statement.

As I noted in my reporting back in September, Save Texas Kids was then one of over 160 groups across the country that have emerged to disrupt lessons on race and gender, according to an NBC News analysis of media reports and organizations’ promotional materials. Several have popped up across the greater DFW area to stoke outrage and engage in school board elections.

Particularly in suburban communities, these efforts have gathered crowds of angry parents who demand action in stern terms, and in some cases have drawn significant response from school boards. It has even cost some educators their jobs — like in the case of Dr. James Whitfield, the first Black principal of Colleyville Heritage Highschool.

Less than a handful of other speakers who did not wear Save Texas Kids shirts also railed against lessons on race and gender, albeit with varying coherence. One woman started her speech by referencing a poll about what percent of Republicans and Democrats would fight an invading force and somehow ended with an ahistorical claim that our country remained “united” during the fight to end slavery.

But their voices were not the majority that spoke that evening. Most of the speakers who took to the microphone were DISD teachers and nurses focused on a few distinct priorities — more support during the ongoing COVID pandemic, increased pay amid intense inflation, and defense of their most vulnerable students who have become targets in a political culture war.

One nurse criticized DISD’s choice to reduce COVID sick days from 10 business days to 5 calendar days. “Many employees don’t have the luxury to take unpaid leave and are telling us they are working while symptomatic just to make ends meet,” they said to the board. Another said she had paid over a thousand dollars of her own money in 2021 for PPE and demanded more funding amid the ongoing pandemic.

In 2017, the district passed a resolution saying Dallas schools would create welcoming and protective spaces, regardless of gender identity or sexual orientation. This includes modest accommodations, like addressing a student by their preferred pronoun. And the commitment to that was made clear in a number of statements from teachers and nurses, which did not mince words.

“If you’re more interested in what’s between my students legs than the systems designed to fail them I have to kindly ask you to reevaluate your priorities,” said a third teacher. “And if this is the first education issue that’s alarmed you, please take a seat.”

by Kaiser Health News Originally appeared in Word in Black

Imani Maatuka is a young, successful attorney working to change

Vista Bank teaches them young, to let them lead the way