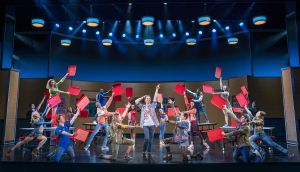 High school is another planet. If you’ve been there, you know that regular humans (well, teenagers) walk into those big brick buildings all over America’s cities and towns, and instantly turn into jocks, nerds, goths, stoners, gays or ruling female tyrants who decide what day you can wear pink.

That last category is the subject of Mean Girls, a fresh and funny musical version of Tina Fey’s hit movie brought to the Music Hall at Fair Park by Broadway Dallas. The terrific national touring production, directed by and choreographed by Casey Nicholaw, packed the hall on opening weekend with daughters, moms, grandmas and all the men in their lives. Honestly, the range of glittering heels, wedges, and tight minis in the audience almost outdid Gregg Barnes’ fine, festive costumes for the show. Diverse body types, skin color and hairdos onstage were definitely reflected in the women buying drinks and posing for photos at intermission the night I saw the show.

Of course, you must go. Mean girls are not just bossy, they’re a party – whether ruling cafeteria tables, holding forth out in the restrooms, strolling the malls, or gathering for a gossipy slumber party. The 24-member cast fills the stage with strong voices singing a harmonious score by Jess Richmond, with witty lyrics by Nell Benjamin. Youthful muscle and groove energize the show, demonstrating the pro version of the latest moves in the hip dance numbers. 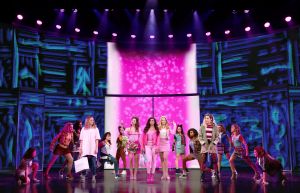 And – just wow – Scott Park’s brilliant set design deserves a round of applause on its own. The video projections, designed by Finn Ross and Adam Young, carry us instantaneously from the wilds of Kenya, where good girl Cady (a sweet, feisty English Bernhardt) grew up as a home schooler, to the lockers of North Shore High School. Parents move. Kids figure it out. Video becomes bricks on the school, banners in the mall, wallpaper in the bedroom, and a flaming red ground for vicious social media posts. Shiver. Math class starting? No problem. Students roll their shiny chrome desks in on wheels. Fast and fun and get it done. (DISD: think about it.)

The show’s title trio are a riot.  Nadina Hassan’s Regina is a hair-swingin’ queen bee with a mezzo sting. She can dance, she can sing, and can she ever deliver those menacing one-liners: “Ding-dong, the bitch is back,” she announces, returning in triumph after Cady has overturned her rule and freed her hapless slaves.

Gretchen Wieners is funny and touching as Olivia, one of Regina’s anointed who “never weigh more than 115 pounds.” Her delivery of “What’s Wrong with Me” rings more than a school bell in its poignant rendering of teenage insecurity.  She’s a little shaky when freed of Regia tyranny: “Who’s gonna tell me what to do?”

Morgan Ashley Bryant is a crowd-pleasing hoot as the gorgeous Karen, a beautiful goose who wakes up in a new world every day – smiling, wide-eyed, with not a clue about why she’s in school.

April Josephine’s eye-rolling characterization of the beleaguered math teacher and her comic timing as Regina’s tipsy “cool mom” got appreciative chuckles from all us moms and teachers. Eric Huffman is hilarious as Damien, a sweet-natured gossip “so gay he can barely function.” Huffman got rousing cheers mid-number when he put on his tap shoes and led the ensemble in “Stop,” a sharp song warning us to think about it before sending that mean text.

The fun of the show is in the energy and playfulness of the company, and the non-stop rapport with the happy audience.  The “Do This Thing” message rings through the second act and is reprised at the end.  Be yourself and that’s cool enough.

Mean Girls runs through May 15 at the Music Hall at Fair Park. For times and tickets check broadwaydallas.org 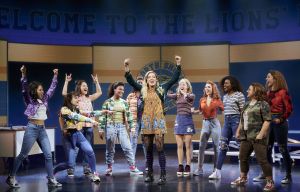 Standing on Shoulders of Giants, April Ryan is Opening Doors for Others

Preserved by Purpose: Following in Faith