According to NFL.com, the key values of youth football are to set up kids for success on and off the field — inspire sportsmanship, leadership, resilience and teamwork. Of course, youth sports is about having fun too, while learning the game. This is nine-year-old Dorrian Robertson’s goal — to have fun playing with friends, while staying in shape.

“My dad has always played football. He started me out in football and running track when I was just four years old,” he shared. “I enjoy watching him win championships with his team.” 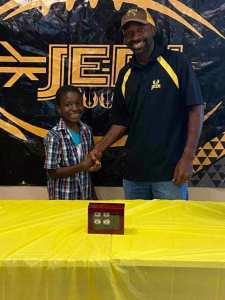 Though youth players in pee wee sports get to try all positions, Robertson says excels best at wide receiver/cornerback spots, same as his dad. With the elder Robertson (Donald) serving as his team’s coach, Robertson feels it’s an added benefit.

“My dad is my biggest supporter, so he’s always helping me to do better,” he said. “My current biggest challenge is being consistent with my catching, so we work on that a lot. But, I’m really good at catching interceptions.”

Over the next year, Robertson strives to win a football championship with his team, make it to State again with his 4x400m track relay team and try out for a soccer team. His 7×7 football team finished 6-2 in the Lewisville Football Association League. 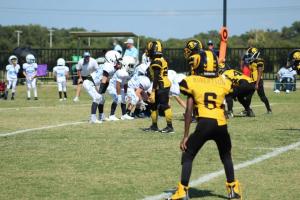 For youth athletes who play multiple sports, there are many added benefits — improvement in coordination and muscle control, instruction from multiple coaches, participation in cross-training – leading to better athleticism, better mental development, teamwork skills, and reduced chances of burnout.

“I enjoy playing different sports, it makes you a better well-rounded player,” Robertson said. “My biggest competition is myself, I’m always trying to be the best version of me. Just be myself, not be like others.”

Robertson’s hope is to continue to excel in football, track and soccer, so that he can one day attend the legendary Division 1 Football HBCU, Grambling State University in Louisiana, like both his parents.

You can continue to follow Dorrian Robertson Oowee Sports Nation (a network for youth athletes) as he enters the summer track season with the Westside track team (Lewisville, TX).

In partnership with the Black College Football Hall of Fame,

Word in Black: Social media addiction and its impact in the classroom