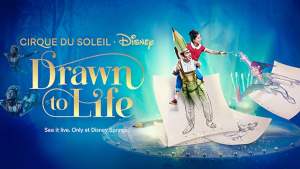 Cirque du Soleil is the world famous performance circus that has entertained and amazed hundreds of thousands of people across the globe. Several destinations have cashed in on the magical popularity of the unique circus and been blessed with residency shows. Walt Disney World is one of those places.

The newest show Drawn to Life is an exquisite portrayal of a young girl who’s father has passed away and left her his animators desk and tools to finish an incomplete animation. It’s very Disney, but unlike some other performances you may see in the park, this show is not a Disney show for cirque fans. It truly is a Disney show for Disney fans.

For some of us, we grew up on Disney films. The classic animations of the mid 20th century are the nostalgia by which Disney keeps folks like me constantly coming back. They’ve mastered nostalgia, and with that ever lucrative Disney vault, the possibilities of more work is endless. Cirque took full advantage of this and has created a story as compelling as any, but to the Disney super fan it’s a love letter to animation, the foundations of the Disney brand, and our childhoods that may seem far in the past, but are always bright in our imaginations.

The show itself has some unique qualities. For one, it’s predominately in English, which is pretty unusual for a cirque performance. It does, however, keep with the whimsical story telling made famous by the circus. Using classic Disney characters, themes, music, even costuming, the audience is taken on a coming of age adventure of a young girl plagues by the legacy of her father, and haunted by his loss. We, with her, get to walk the path of healing through trial an error, animation, and performance sequences, which also parallel the struggle of an artist to achieve true creative expression. It really is wonderful.

We see classic Disney villain’s maniacal laughter as litmus of evil; we see balls of paper crumpled up and eraser failing to get all the stray lines. All of this performed by actual human people through metaphor or literal trapeze or tumbling acts.

The most impressive aspect of the show has to be the subtext and possible allusion to Disney’s own past. You see this show follows a youjng woman who is aspiring to be an animator like her father. Walt Disney, the founder of Disney, historically didn’t let women be animators.  The story continues as mental and emotional barriers hinder her from achieving her goal; but of course she presses on. Using the classic Disney characters and themes she moves through her grief and writer’s block, even by the end accepting the literal balled up animation, which has been stopping her progress the entire show, as a part of the grieving/creative process. The entire show ends with an all female act soaring through the air with acrobatics and exciting music. They demonstrate the overcoming of loss, the achievement of success, the perseverance of character, and in my opinion a nice not so subtle head nod to the women who may have not achieved their dreams because someone told them they couldn’t. It all just seems like a great turning of the page for Disney and a statement of evolution worth the kudos.

If you’re a Disney fan, a Cirque du Soleil fan, a animation fan or just a child at heart this show is for you. It is showing in the Walt Disney World resort now. Book your tickets and enjoy the show!

By Raven Jordan Sibling trio band The Grays is playing

Tiana’s Bayou Adventure will take you on a journey inspired

The Stigmas and Realities of an Absent Father