To be the fastest sprinter on the track, you need to be explosive, propelling yourself at the start of a race and moving your limbs quickly and forcefully at high speeds. This proves to be no problem for eight-year-old Uriah Guster who ranks in the top three of fastest runners (within his age group) on his Westside Baptist Church track team.

For Guster, who got his start in the sport just three years ago, his natural ability is exceptional and willpower to excel is praiseworthy.

“I always felt I was fast, so when I tried it the first time, I really liked it,” he said. “I love how track makes me feel stronger and run faster.” 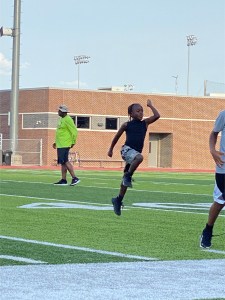 Of all the races he competes in, he feels he is best at running the 50 meter dash (where he gets his highest speed) ⏤ on the other hand, his biggest challenge is the 200 m. The longer the race  more endurance is required, one of Guster’s goals for the year ⏤ to build more endurance.

According to crazyathlete.com, the most effective way to build endurance is to increase distance and run time, training for longer and harder. Like his dad, Guster also plays football in the off-season to prepare for track.

“One of the biggest things that helps me to focus and train is my coach’s critiques and assessments. I work very hard to improve, so that I can continue to come back and do better every time,” he said. 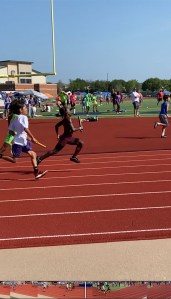 Because he’s short in stature, Guster is sometimes underestimated. Yet, the best piece of advice he’s received is to “look ahead and not at his competitor when racing because it slows you down.”

Ultimately, like any other third grader, Guster’s big plans are to become the fastest runner in the world and advance to the next level in high school, then college.

“My favorite part of my team is being able to make friends and travel with them to track meets out of town,” he said. “We compete, but we also have fun together.”

Though there will be other competitors with larger teams and even faster runners, his mindset of always looking forward and staying the course will carry him far. Follow Uriah Guster on Oowee Sports Nation (a network for youth athletes).