This past Juneteenth, a collaboration of fashion, music and entrepreneurship was showcased in the first annual Juneteenth Fashion Show hosted by Legacy West and Legacy Hall at The Box Garden in Plano, Texas.

Emceed by Project Runway’s Season 17 contestant Venny Etienne, the fashion show showed the true essence of beauty, elegance and authentic design by an assembly of designers of color. Think Three Media, a Dallas-based marketing and public relations company that focuses primarily on the unique exposure of DFW black-owned businesses, produced this event.

According to Leah Fraizer, CEO of Think Three Media, she finds delight in the distinctive, cultural elements that make the black community what it is, ranging from entertainment to cuisines.

“I wanted to share many of these things with the community in an effort to celebrate freedom, unity, and to honor the sacrifices of our elders — including Opal Lee — and our ancestors,” Frazier said. “I’m so happy that this event alone brought so many people a little piece of hope and a whole lot of Black joy.”

The multi-level complex was filled with over 1500 attendees inside and out deeming the event as one of the highest attended fashion shows in the DFW metroplex. Attendees were exposed to various vendors outside near the stage and potential food options inside Legacy Hall.

Alexis Daniels, Founder and CEO of AND-MADE, was not only a vendor at the event but also showcased her pieces on the runway. Daniels creates unique and color accessory pieces with diverse shapes and physical arrangements.

“I love to make something out of nothing,” Daniels said.

Daniels utilizes inspiration from artwork and people that she encounters to hand craft bright and lively pieces. This was Daniels’ first runway show and according to her, she received positive energy and assistance from everyone.

“All of the people behind the scenes were great with answering my questions, and it’s been super dope,” Daniels said. “All of the models were sweet, and everybody helped me out to put the looks together to walk them down the runway, and it all came together brilliantly.”

Each designer had their specific style of clothing that represented who they were as a designer. The clothing ranged from high-leveled, amplified dresses and garments to simplified yet contemporary pieces of everyday work and fitness attire. Other brands included distinct styles like African wear, street designs, and high-end chic clothing.

Each model walked with a confident stride down the enlarged, black runway stage surrounded by engaged attendees gathered on the greenery.

Jasmine Willis was one of the models for Amy Holly ResortWear and Ese Azenabor, and she not only showed her pride for her culture but also her pride for her gorgeous afro. During her walk, Willis was given sound accompaniment from the well-known song “She’s Your Queen” from the movie Coming to America, which molded perfectly with her delicate patting of her afro.

Willis has been a part of the modeling scene since 2018, and she enjoyed seeing the growth in herself and her fellow runway companions throughout the journey.

“This event to me means liberation: for me to be myself fully,” Willis said.

Amy Hampton is the designer and founder of Amy Holly ResortWear, which was inspired by her grandmother who taught her how to sew and used to wear these extravagant and extremely decorated caftans. Hampton’s collection included a rainbow of caftans without zippers or buttons.

“I want women to be able to show up, take up space, feel beautiful, and feel as they’re on a HOLLYday every single day of their lives,” Hampton said.

Hampton utilized her love for travel and a mixture of her Ugandan and American culture to create her pieces. Each piece was made with a different fabric including linen, silk, lace, cashmere, cotton, and more.

“I wanted every single piece of fabric to add personality to the caftan of each woman,” Hampton said.

Along with the runway show, other tributes were made in commemoration of Juneteenth and Father’s Day, including a Juneteenth message from WRLDFMS Tony Williams, a DFW Black Creative and Fashion Industry tribute video by Think Three Media, and a Father’s Day tribute to one of the designers Le’Nard Meyers of Energy Check, who recently had his first-born.

Meyers showcased his fitness-based designs from his brand as well on the runway. Energy Check is a wellness brand inspired by Meyers’ personality and energetic presence as well as his passion for fitness.

He presented a collection of sexy-styled athletic and casual wear that added to the show’s overall stylistic diversity.

“I want you to feel like your best version of yourself in my brand,” Meyers said. “Your mindset changes when you see Energy Check.”

Although the runway show came to a close, the night was still going with the Grammy award winning Tony Williams’ performance including songs from his soon to be released album “A Fish Without a Bicycle”. Williams has performed and collaborated with big-name artists such as Jay-Z, Pusha T, Rick Ross and Kanye West, his first cousin.

Williams credits his musical family upbringing and being exposed to musical genres such as gospel and jazz to his overall sound. Along with those musical stylings, his experience with alternative rock bands and reggae also gave him a wider scope of musical talent and understanding as an artist.

“I am a combination of every musical experience that I’ve ever had,” Williams said. “So when people say what kind of music do you do, my response is simply ‘good’.”

Williams brought a combination of distinct musicality vibes to the scene that had everyone feeling loose and comfortable enough to enjoy themselves. He also found this event fit for his other skills with design and fashion, which he acquired while studying at the Fashion Institute of Design and Merchandising in Los Angeles and establishing his two vintage apparel stores.

According to Williams, he has pride in providing a voice for the new generation when it comes to being involved in events like this.

“When you see us, you see resilience. You see that we are determined and unbreakable and that we are survivors in the face of adversity,” Williams said.

This event exemplified togetherness and unity during the celebration of Juneteenth, and left attendees and designers not only grateful but enlightened.

Quiana Dasha McDaniel is the designer and founder for House of Dasha. McDaniel brought her self-made cosmetics and elevated clothing specifically tailored to plus-sized women consisting of many eye-catching patterns and colors.

McDaniel shared how her confusion for understanding the celebration behind Juneteenth made her skeptical, however, after participating in the event and hearing more of the value behind it, she realized just how important the holiday meant for the community.

“This Juneteenth celebration this year was really mind blowing and moving,” McDaniel said. “I can’t wait to see what the future holds.” 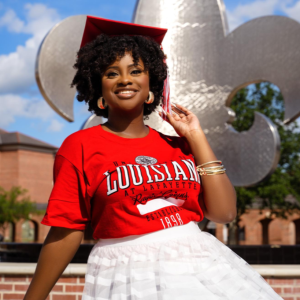