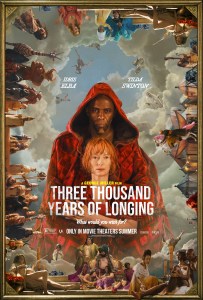 When you hear the name Idris Elba, you either think of the actor who speaks American so well that you didn’t even know he was British or you instantly start swooning. Or maybe both? Go ahead and swoon. No judgment here.

But that’s not what this is about y’all. Calm down. Mr. Elba is starring in the film Three Thousand Years of Longing, alongside Tilda Swinton, directed by the one and only George Miller, who has directed movies like Babe, Pig in the City, and the Mad Max movie lineup.

I was able to join the press conference this past Sunday where we learned more about the upcoming film.

Dr. Alithea Binnie(Tilda Swinton) is an academic content with her life and a creature of reason. While in Istanbul attending a conference, she happens to encounter a Djinn(Idris Elba) who offers her three wishes in exchange for his freedom. This presents two problems. First, she doubts that he is real, and second because she is a scholar of story and mythology, she knows all the cautionary tales wishes gone wrong. The Djinn pleads his case by telling her fantastical stories of his past. Eventually, she is beguiled and makes a wish that surprises them both.

“Well, I guess the simple answer is it’s a relatively short story. It’s more of a novella, about 140 pages. It was so loaded with material, and most of it was kind of paradoxical. I mean, it’s a short story that sets in a hotel room. It’s a conversation that happens over a relatively short period of time, and yet the content basically is across three thousand years. It’s a fairy story, and yet it seemed to have a lot of truth in it, which, again, is very, very interesting. Then you have two characters, one is a scholar, a creature of reason, and the other is a creature of emotion and desire. And one is very mortal and the other, it can live indefinitely. And ultimately, it’s about, I guess, about stories and what they do to us, and in particular, love,” said Miller.

Of course, a lot of us have always been curious about the tale of the genie aka Djinn(Islamic) whether we were watching Aladdin or classic shows like I Dream of Jeannie. It’s quite a fascinating tale and who wouldn’t want the chance to have three wishes come true. Come on. You can dig it.

3000 Years of Longing was adapted from a short story called The Djinn in the Nightingale’s Eye by British Novelist A.S. Bryant written in the 1990s. Though this book has many stories, this is the one that Miller was most drawn to. The author herself even asked Miller why he chose this one and not the other short stories. Miller saw this one piece as special.

“She asked me why did you pick this particular story. I said well it just feels real and she says you know that’s because it is. Everything in this story is true except for the Djinn,” Miller said.

Also, I must say that there truly aren’t that many” genie” based movies these days and it’s quite refreshing to see during a time when a lot of things in the world are questionable with little resolution.

Perhaps the most interesting thing that I learned was about the casting process and how Elba, Swinton, and Miller all came together as a team, and how they bonded from start to finish with this movie during the pandemic.

“I mean what’s really interesting, and Idris and Tilda both know this story, until I actually met them in person, I sort of knew them from the movies and television and the work that they’d both done. But I had no idea who they were outside of the characters. I’d seen them play and I was lucky enough to meet them both, and Tilda for a longer period, that we happened to be at the same dinner one time and we had a lovely chat. And Idris only for a few minutes in London at some event. But the moment I met both of you, I was struck by how vivid they were as people, their normal personas. And once that happened, I couldn’t think of anybody else. We were still working on the screenplay,” said Miller.

At this point, Elba has done over 100 films now, but he’s never played the same character twice.

“It was really important to me actually to veer away from anything that we may have seen before because I think this character’s journey is only really believable to the audience if we feel like we have never seen anything like this before, isn’t it? The audience is gonna go oh, okay, haha, funny story, haha, tell me a joke. Do the wish thing. You know, do the magic thing. But I think you are engaged in this character to the point where, quite cleverly, George makes you want to ask is he real or isn’t he real. And that you know obviously is the device we end up with at the end of the film,” says Elba.

Miller, Elba, and Swinton sat around a room for weeks, more like two years kicking ideas around trying to lay the foundation of what George and screenwriter Augusta Gore had presented. They all used their collective influence to make this film come alive.

“And we really had a sense of confidence I would say about the decisions we’d made. And we felt quite settled. Having said that and this is again, you know, the great George Miller having said all of that, we still felt free at the last minute to try fresh things. Even though we had been making decisions for months and coming to choices, we still felt very open and free to sort of bat it back and forward in different ways through the takes,” said Swinton.

Of course, I must ask you. If you had three wishes to make, what would they be?