Originally appeared in Word in Black

From censorship in classrooms to academic recovery, there was a lot at stake for public education during the midterm elections.

A week after the midterm elections, not all of the races have been called, but we’re starting to see how key issues in the K-12 space will play out amidst new leadership and policies.

With at least seven state superintendent seats and 51 state boards of election seats up for election, there was a lot at stake.

In mid-October, a few weeks before the midterm elections, a Pew Research Center poll found that education was in the top three issues for voters, coming in at 66% of Democrat supporters, 60% of Republican supporters, and 64% of all voters. A Washington Post—ABC News poll found similar results, with 59% of voters saying education was a “very important” issue in who they were voting for in Congress, and 18% identifying it as “one of the single most important issues.” 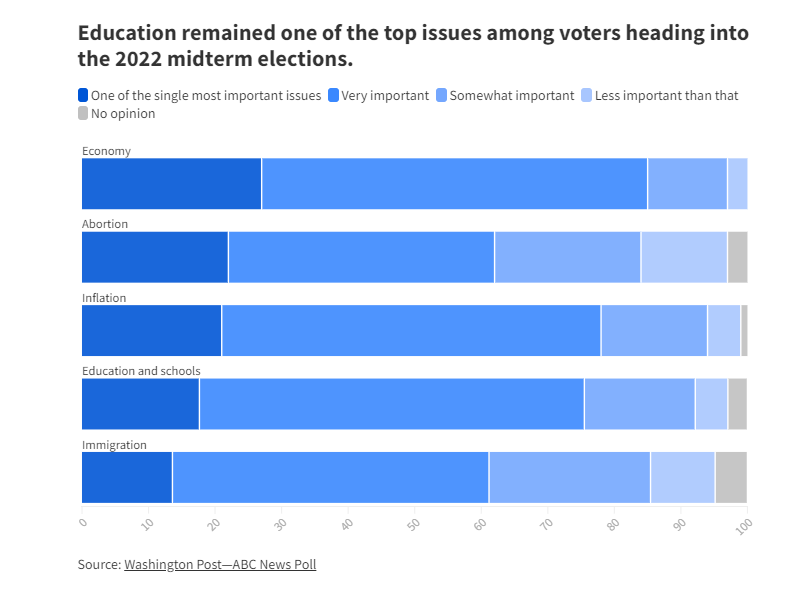 Dr. John B. King Jr., president of The Education Trust and former secretary of education under President Obama, says the top education issue that still keeps him up at night is equity in public schools. He says our economy and democracy depend on addressing education.

“A majority of kids in the nation’s public schools are kids of color, a majority of the kids in the nation’s public schools participate in free and reduced-price lunch programs,” King says. “If we don’t get much better — very quickly — at providing educational opportunities to low-income students and students of color, we have no future as a country.”

But teachers are what give him hope. He says classrooms and teachers around the country continue to save kids’ lives — the same way they did his. After his parents passed away when he was 8 and 12, King credits New York City public school teachers for saving his life, making school a safe, supportive, and engaging place.

“As hard as COVID has been on kids and families, in every community, there are stories of teachers who went above and beyond to help their kids academically, but also to help them get food, figure out how to deal with the trauma of losing a loved one,” King says. “The beauty of what teachers are doing for kids every day all across America gives me a lot of hope.”

Let’s take a look at how education issues played out during the midterms.

It’s a Long Battle Ahead for Censorship in Schools

Over the last few years, there have been many attempts at censorship in classrooms, whether it’s through book bans, limiting discussions around gender and sexuality, or blocking teaching the truth about racism and other forms of prejudice — which is what opponents erroneously call “critical race theory.” And it looks like those battles aren’t going anywhere any time soon.

Election tracking site Ballotpedia analyzed 361 school board races, and its analysis found that 36% of candidates who oppose diversity initiatives and gender-neutral learning materials won their races, compared to 28% of winners who support these policies.

“The midterms are happening against this background of intense censorship activity almost everywhere in the country,” says Dr. Chris Finan, the executive director of the National Coalition Against Censorship. He cited the landslide reelection of Florida Gov. Ron DeSantis, who has led book ban efforts, particularly those dealing with race and racism, slavery, and LGBTQ+ issues. “There’s a lot of anger, and some of that anger that turned toward this book issues, and a lot of ambitious politicians seized on the issue to help them boost their support and their runs for office.”

A Pew Research Center poll found that nearly half (46%) of Republican parents think that students should not learn about gender identity in school, compared to only 28% of Democratic parents.

While relatively no one polled thought that slavery shouldn’t be taught in schools, the way they wanted their children to be taught about slavery was drastically different between Republican and Democratic parents.

On the Republican side, 66% of respondents said they prefer their children were taught that “slavery is part of American history but does not affect the position of Black people in American society today.”

On the other side, 70% of Democratic parents said they want their children to be taught that the legacy of slavery still has an effect on the position of Black people in American society. When looking at all parents polled, 49% voted for slavery still having an impact today compared to 42% voting that it doesn’t. 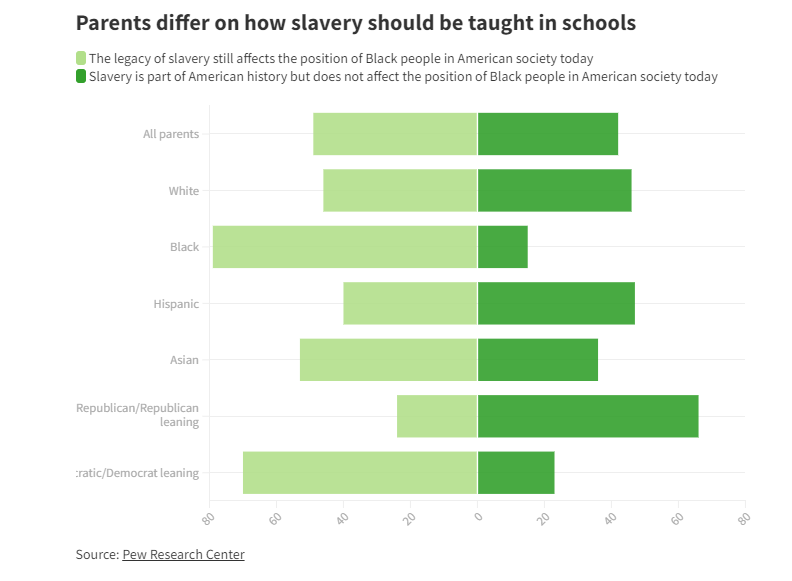 This isn’t the first-time censorship — specifically, book bans — has been a nationwide issue. After Ronald Reagan was elected president in the ‘80s, there were widespread efforts to ban books that went on for nearly a decade. So, with that in mind, we’re “very early in the cycle,” Finan says.

“I don’t think the issue is played out by any means,” Finan says. “I’m not going to be surprised if we start hearing about new school board directors — school board members around the country supporting and joining in this campaign of censorship.”

The Road to Academic Recovery

Following years of virtual learning and devastating NAEP results, academic recovery is a top issue on the minds of candidates across the political spectrum.

“You have the potential for bipartisan progress on putting resources into things like tutoring and summer learning initiatives, addressing teacher shortages, so that’s encouraging,” King says. “Most places are forward-looking and asking what do we do now to address the impact of COVID and to address underlying inequities that COVID exacerbated?”

The Fight for LGBTQ Rights

Though there’s plenty that keeps her up at night, Melanie Willingham-Jaggers, the executive director of GLSEN, says Gen Z’s turnout in this election has really given her hope — especially when it comes to making sure schools are more inclusive and affirming spaces for LGBTQ+ folks.

But this is both a blessing and a curse. As young people — the biggest, most multiracial, queerest generation on record — turn out to make their progressive voices heard, their opposition is trying to quiet them and “make the world smaller for the kids coming up behind them,” Willingham-Jaggers says.

“These young people are at the heart of that inflection point. We have to fight for equality, education, truth, and democracy,” Willingham-Jaggers says. “And they know it, and this is a heavy backpack for them to carry.”

They still have to fight for inclusive curricula — like the truthful history of the country, and positive and accurate representations of different communities in our society, including LGBTQ+ people and people of color.

While the midterms proved to be a “rainbow wave,” there are still states like Georgia, Texas, and Florida that continue to be an uphill battle and at the center of our “deeply divided political climate.”

“That’s unfortunate because that opposition really uses LGBTQ+ people as a wedge issue. They’re gonna continue to attack education, and that’s troubling,” Willingham-Jaggers says. “LGBTQ+ youth, especially trans and non-binary children, continue to be exploited as political pawns, and it’s time to name that for what it is and fight back against these extremists.”

The generation of students who grew up participating in active shooter drills at schools is old enough to vote.

“They know how broken our gun laws are in this country and how much change is needed,” King says. “Young people throughout the country, in survey after survey, indicate that they are very worried about guns and believe deeply that we should be doing more to have common sense gun reform.”

There wasn’t accountability for elected officials who have been promoting essentially unregulated access to weapons of war.

– JOHN B. KING JR., PRESIDENT OF THE EDUCATION TRUST

School safety was the top priority for voters in an October 6 High Point University poll, which surveys adults in North Carolina. It topped the list, with 74% of those polled saying it was “very important,” with overall education and inflation coming in second at 73%.

But it wasn’t universal. In Texas, where 19 students and two teachers were killed in a shooting earlier this year, “there wasn’t accountability for elected officials who have been promoting essentially unregulated access to weapons of war,” King says.

However, especially with the huge turnout among young voters, King says he is hopeful this election is proof that “politicians across the political spectrum will realize that if they want to appeal to people, they have to have a more reasonable message on common sense gun reforms.”

A Big Win for Art and Music Funding

California’s Proposition 28, which will pump around $1 billion each year into music and arts education, passed by a wide margin with 61.5% of votes.

It’s the first bill of its kind, and this is “the largest investment in arts that’s happened in this country,” says Robert Manwaring, a senior policy and fiscal advisor at the California-based organization Children Now, who also helped with the bill’s language.

“That’s really exciting because there’s dramatic variation across schools and districts in the state on who has access to the arts and who doesn’t,” Manwaring says. 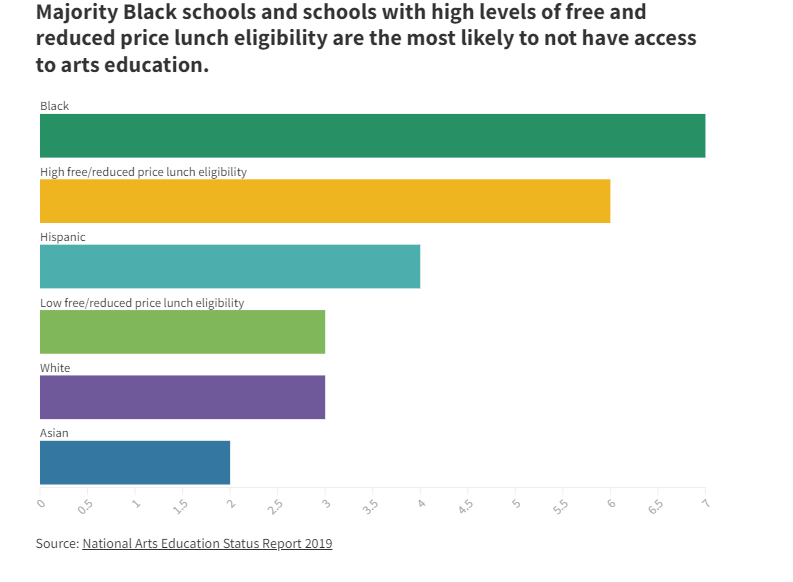 The majority of the funds will go toward hiring music and arts teachers, and about a third is set aside for schools with high levels of low-income students.

Now, the challenge is for the state to figure out how to recruit teachers for these new jobs, whether it’s through expanding training programs or finding otherwise qualified people in the arts to go through teacher certification.

“The funding is there, but the art teachers aren’t yet,” Manwaring says. “There’s going to be some serious work that needs to get done there to fill all these slots.”

The deal to release Griner was consummated a week ago

The Return of AFRIMMA is Here with this year’s theme, This is Africa