Over half a century ago, a coalition of activists, lawyers, religious leaders, elected officials and other prominent community members in Dallas banded together to end institutionalized racism and oppression first experienced under chatel slavery and later recodified into the Jim Crow Laws that drew red lines and meted out violent punishment based on the color of one’s skin. Under Jim Crow, a number of horrific lynchings occurred in the Dallas area in the late 19th and early 20th centuries. In the 1940s and 1950s, a series of racist bombings of Black family owned homes rocked Dallas during a time of upward mobility for some in the Black community who had begun to purchase homes in previously all-White neighborhoods. These decades of violence belied the widespread myth that our city has long had a particular spirit of civility with regard to race relations and set the stage for the aforementioned coalition to begin fighting for civil rights in the 1950s.

In 1955, the Dallas branch of the NAACP launched a multi-pronged campaign to attack segregation legally and politically. They filed a lawsuit against Dallas schools for not admitting Black children. That same year, the Youth Council of the Dallas NAACP kicked off a movement to fully desegregate the Texas State Fair which had been segregated since 1889. During the 1950s, the only day that Black folks were allowed to fully participate in the State Fair was during Negro Achievement Day, a tradition collaboratively organized by the Negro Chamber of Commerce and the State Fair Board. “TODAY IS NEGRO APPEASEMENT DAY AT THE FAIR,” read the Youth Council’s picket signs.

The Youth Council and their movement were the brainchild of Juanita Craft, a towering figure in the Dallas NAACP who later went on to become a City Council member. Craft recalled the events in a 1974 interview: “Those kids went to the starting point at Lincoln High School and boarded the floats right along with the queens and everybody else and rode down the streets saying, ‘Stay out. Don’t sell your pride for a segregated ride.’ The kids were on top of people’s houses along the route of the parade with megaphones telling about the segregated policy out there and to stay out.”

The youth-led protest campaign boldly assailed those in the Black community who they saw as compromising and collaborating with the forces of oppression. Eventually, adults joined in on the campaign, leading to a significant boycott of the State Fair. These protests contributed to the eventual ending of Negro Achievement Day in 1961 and the full desegregation of the fair before the end of the 1960s. Other efforts, such as a 1959 lunch counter integration campaign and a pressure campaign to desegregate the bus system, were also orchestrated by Craft and the NAACP.

Today, the Dallas NAACP remains an active force for civil rights and equity, as does their Youth Council. But their work has shifted away from leading mass protest campaigns toward education, advocacy, and other efforts. In their stead, several youth-led organizations have formed a coalition that has organized much of the large-scale civil rights protests and campaigns in Dallas as the Black Lives Matter movement has gained momentum over the last decade.

In Defense of Black Lives Dallas is a member of the larger Movement for Black Lives, and is itself a coalition of local activist and community groups including BYP100, Mothers Against Police Brutality, the House of Rebirth, Democratic Socialists of America North Texas, the Palestinian Action Comittee of Texas and the Dallas Alliance Against Racist & Political Oppression (which itself is a chapter of the National Alliance Against Racist & Political Repression, an organization founded in Chicago, Illinois, in 1973 to amount organized action against injustices to individuals due to their race or politics).

In 2020, two of the coalition members, Mercedes Fulbright (an organizer associated with BYP100) and Sara Mokuria (co-founder of Mothers Against Police Brutality) were appointed to a fourteen member working committee facilitated by Dallas County charged with proposing a variety of police reforms. (Incidentally, a fourteen member council was selected by Dallas’ white elite back in the 1960s—including Black businessmen and clergy—to facilitate a desegregation plan that was palatable to White city planners.)

Faith leaders were also a part of the reform conversations in 2020, just as they were in the 1950s and 1960s. In 1969,  shortly after Martin Luther King Jr. had been assassinated, Rev. Peter Johnson,  the youngest member of the Southern Christian Leadership Conference, was sent to Dallas by Martin Luther King Sr. to promote a film about his son. He was sent because Dallas was the only one out of 800 cities that had refused to screen the film. Rev. Johnson was able to get the film screened, and in the process, learned about the plight of Black homeowners around Fair Park who were facing the threat of eminent domain. On New Year’s Day in 1969, Johnson gathered hundreds of people in protest at the Mt. Olive Lutheran church, and then proceeded to block the Cotton Bowl parade route. This laid the groundwork for homeowners to later meet with city leaders about their concerns.

In a 2021 interview, Johnson drew a direct connection between his legacy and the current political moment. “These kids who call themselves Black Lives Matter, that’s the next generation of freedom fighters,” Johnson said. Following in Johnson’s tradition, Pastor Fredrick Haynes III of Friendship Baptist West has been a vocal supporter of the Black Lives Matter movement. He too was a member of the fourteen member working committee created in 2021 and put forth a policy memo dubbed 10 New Directions for Public Safety and Positive Community Change recommending a number of police reforms.

Although some new training and alternative first responder programs have been put in place since 2020, on balance, the majority of the reforms put forth by activists during the height of the protest movement failed to be taken up by Dallas City Hall. An essential element to the success of prior civil rights victories in Dallas appears to have been the leadership of key members of  the City Council as well as the support of influential members of the business community. During the push for school desegregation, the second major civil rights campaign in Dallas, a key champion was the recently elected Mayor Earle Cabell. Mayor Cabell did not want the sort of racist violence that occurred in other cities amid school desegregation to unfold in Dallas, and along with the Dallas Chamber of Commerce and the Dallas Citizens Council, promoted a style of quiet reform that came to be known as “the Dallas way.” 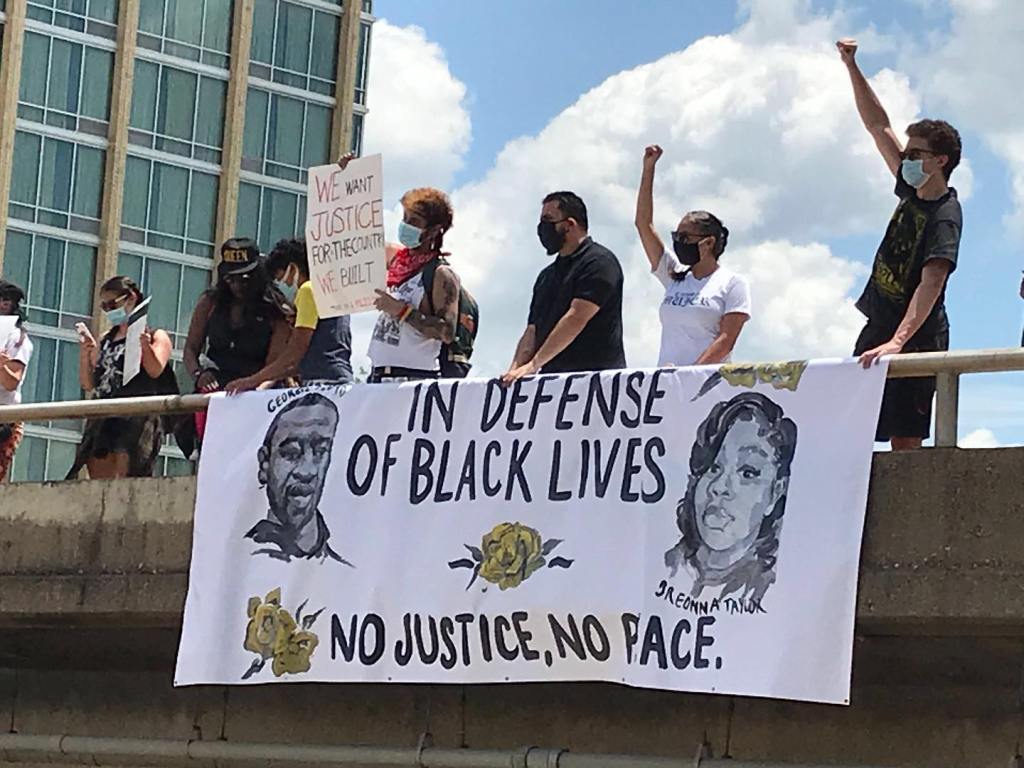 A substantial amount if not the majority of the White community opposed desegregation at the time, including many White religious leaders. Joe Walton, Reverend Carey Daniel, and Judge Tom P. Brady all distributed pamphlets claiming that those who asked for integration were communists. In spite of this resistance, Mayor Cabell was able to desegregate schools without the sort of sensational violence that occurred elsewhere, in large part by enlisting the help of influential business owners in the community. In 1967, the schools were declared desegregated, even if they would effectively remain segregated for decades. It wasn’t until 2003 that DISD was finally removed from federal oversight, 49 years after Brown vs. Board of Education.

These days, there does not appear to be much support within City Hall for the sort of reforms pushed by contemporary civil rights activists. We may have a Black mayor in Eric Johnson, but he has opposed the majority of the proposals put forth by the Black Lives Matter coalition in Dallas and has been boosted by explicitly anti-BLM political organizations and Republican politicians. Some city council members, like Casey Thomas and Adam Bazaldua, were vocal supporters of reform in 2020, but they could not build a viable majority, and ultimately the police budget was increased.

In lieu of government action, many companies in the private sector have rolled out new policies, resources, and reforms to greater and lesser degrees of efficacy and grace, such as the OneTen initiative that was the subject of the cover story for a recent issue of Dallas Weekly. It’s no secret that Dallas is a city where the shots are largely called by big business leaders, and back in the early days of the civil rights movement, it wasn’t any different. Even a vocal advocate like Mayor Cabell had to rely on allies in the business community to make change. But the private sector can only affect so many of the reforms that the Black Lives Matter movement proposes and few appear to be willing to take up the fight to shift the bulk of funding in our city budget from the police department toward investments in communities south of I-30 that still live in the persistent grip of the structural racism that was once enshrined municipal law less than a century ago.

So as we reflect on the progress of the civil rights movement this Black History month, let’s remember that it is not something consigned to the past. It is an ongoing and unfinished effort, one which started long ago and will likely continue well into the future. And by conceiving of it as a continuous process, we can better understand how far we’ve come, and how much farther we may have to go.

OP-ED: The Power of Mentorship

Why We Need More Black Psychologists in Schools