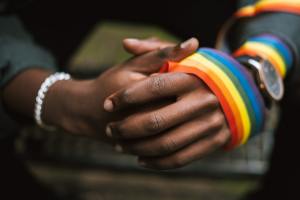 A new survey found that only 50% of Black LGBTQ high school students find school to be an affirming space — and that was before Florida’s legislation came along.

by Maya Pottiger
As appeared in Word In Black

In her Intro to Black LGBTQ Studies class at Howard University, Dr. Jennifer Williams notices a difference in students now compared to when she was a student on the campus in the ’90s.

Back then, in the era of Don’t Ask, Don’t Tell, Williams described the LGBTQ culture as “pretty silent.” While there were some “out” students, there wasn’t a queer presence on campus, nor were there LGBTQ organizations or courses.

But now, students in her class, which had a waitlist this semester, are enthusiastic about the topic and eager to engage in discussions.

“Our culture has made a shift,” Williams, an assistant professor of English, says, of attitudes toward and treatment of LGBTQ people. But if we needed proof that more change is needed, look no further than Florida’s widely criticized “Don’t Say Gay” bill.

The bill, which is officially titled “Parental Rights in Education” and awaits Florida Gov. Ron DeSantis’ signature, aims to ban discussions of gender and sexual orientation with younger students. Opponents believe if the bill is signed into law, it will further stigmatize LGBTQ students and their families, and lead to increased bullying.

The bill is a “series of gaslighting and political violence against minoritized populations,” Williams says, because, unlike the college students in her class, elementary school-age “kids aren’t having complicated conversations about queer theory.”

Williams questions how much exposure young students would even have in school to teacher-led classroom discussions about sexual orientation or activity of any kind.

“This bill is talking about protecting kids,” Williams says. “You protect kids by making them feel like they belong, that they are OK, and that their feelings are valid — not by shaming them into silence.”

A school is a place where children are supposed to learn and open their minds, says Sage Dolan-Sandrino, the National Black Justice Coalition Monica Roberts Fellow and member of the Youth & Young Adults Action Council. The only thing this bill is teaching children is to “silence, vilify, and erase” queer students, which would directly lead to harm against them everywhere.

“These kinds of bills set extremely dystopian and violent standards and norms that ultimately encourage and excuse cultures of violence against Black and Brown trans folks and queer folks,” Dolan-Sandrino says.

Black students at school deal with the intersectionality of racism, sexism, and anti-LGBTQ ideology and behavior. So on top of the anti-trans legislation in Texas and critical race theory bans nationwide, the Don’t Say Gay bill adds to the messaging that crucial aspects of Black LGBTQ students’ identities are taboo subjects.

More Than Half of LGBTQ Youths Do Not Find School ‘Affirming’

Even before these many pieces of legislation started targeting Black students, fewer of them were finding school to be a safe or affirming space.

A 2020 report by GLSEN and NBJC focused on Black LGBTQ high school students found that among the reasons they didn’t feel safe at school, sexual orientation was the top reason, with more than 50% of respondents reporting this. Race or ethnicity ranked fourth, with around 31% reporting it. In fact, 30% said they missed at least one day of school in the past month because they felt unsafe or uncomfortable. Further, around 40% of Black LGBTQ students reported being harassed or assaulted at school due to both their sexual orientation and race or ethnicity.

More than half of Black LGBTQ students who were harassed or assaulted did not report these experiences to staff, mostly because they didn’t think anyone would do anything about it.

“There are faculty and administrators who are not equipped with bias training or sensitivity training,” Dolan-Sandrino says. “Students don’t feel that there is any support system that they have.”

Indeed, less than half of these students told family members about the bullying and victimization they faced at school.

by Jess Washington Prism Health North Texas has partnered with