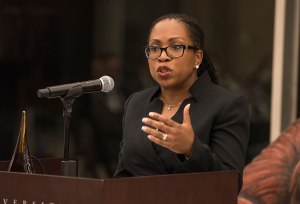 Most of us are aware of the Supreme Court hearing happening right now. Another ‘First Black” event for the history books literally; however, most of the time I am unconcerned with first blacks. The idea typically is not my way of seeing the world. In my world view the “First Black” title is usually translated to “First Black the white people allowed …” you fill in the rest. But this first Black is a little different.

Judge Ketanji Brown Jackson, fits a more focused mold than a lot of the other firsts.  Black people have long held the sentiment “you’ve got to be twice as good to be seen as average” or some version of it; I’m sure you’ve heard it said by an elder or someone close to you. The thing is Judge Jackson literally is twice as good. Often we hear of women, non-white people, and especially Black women having to politely take the criticism, “advice”, and opinions of white men who are, in some form or fashion, over them in a professional or academic setting. If you saw the first day of hearings you have already seen Judge Jackson’s “if this MF don’t stop talking to me like this” face multiple times. I’m 100% positive it will be a meme by the time you read this.

It is to be expected for the GOP to try and railroad anyone who isn’t in lock step with cult of Trump or at least anti everything progressive, and its to be expected that they would question all types of asinine topics and tangents just to poke at a person they know they really can’t measure up to. This session was no different, but this time I did feel as though the presentation of “I’m better than you” was humbly on display. Judge Jackson calmly (I still don’t know how) responded to all of the GOP’s mishegas with poise and professionalism and retorted their, let’s call them points, with facts and common sense. It was impressive to watch.

Right now, I think what is happening is something that is subtle but impactful. You see, sometimes, the first Blacks aren’t always the best Blacks. I can point to the first Black Supreme Court justice Clarence Thomas (cue lighting strike). Without getting into a long tirade on how Clarence Thomas has let the Black community down, and in my opinion intentionally held us back, we can simply point to Anita Hill, his record of dissent, and even his wife and his non recusal as evidence of his mission on the Court. I believe Judge Jackson will bring some form of balance back to the Court even though it will lean “conservative”.

Senator Cory Booker most embodied what the moment means in his comments to Judge Jackson, which brought her and many others to tears as he spoke.

“I’m not letting anybody in the Senate steal my joy…Don’t worry, my sister. Don’t worry. God has got you. How do I know that? Because you’re here and I know what it’s taken for you to sit in that seat.” he spoke. Why I bring up Sen. Booker’s comments is because as we watch I began to notice a general lack of support from the Democrats. No substantive connections to what’s happening in the social space of the country. The GOP’s fascism run, the QAnon cult, re0imurgence of public racism etc. was just not there. But Judge Jackson fended off the assault in my opinion basically alone, In that I saw the First Black, as we need it. And in that single handed battle she fought, and won. And of course, her presence, intelligence, and image has already changed how Black people and Black women specifically will view their role in this Democracy. And that’s a good thing.

Roe v Wade, Voter Suppression, and “We” The Voters

The Afiya Center Looks Ahead to Summer Health Events

Roe v Wade, Voter Suppression, and “We” The Voters

By Ben Jealous President of People For the American Way