When contemporary music meets hip hop with a twist of bright neon lights and insanely talented artists… you get one dope ass event! And yes, I’m referring to Questlove’s Hip Hop Brunch that took place at The Factory in Deep Ellum on Saturday. The afternoon started with DJ Spinderella on the 1’s & 2’s and Tashara Parker, from WFAA, on the mic hyping the crowd as people mingled over appetizing foods and refreshing drinks.

The Dallas Symphony Orchestra took stage followed by music extraordinaire DJ Questlove. The eclectic sounds throughout the venue had heads bobbing for 90 minutes straight. The visual arts by Jeremy Biggers and Jim Rizzi were mesmerizing and appearances by the Dallas Black Dance Theatre had people dancing the afternoon away.

It was the perfect moment to celebrate Dallas and the amazing talent we have here in the city. It was a total vibe and deep down we were all happy to actually see each other in-person, because outside is finally open.

If you missed the event, no worries Dallas Weekly was there for exclusive interviews and more. After the show, I had a chance to catch up with one of the masterminds behind this historical event, Damany Daniel.

Interview with Damany Daniel, Chief Imaginator of The Event Nerd

LH: Damany, how did this collaboration with Questlove and The Dallas Symphony Orchestra come about?

Damany: Sanjiv Yajnik, the President of Capital One Financial Services, is also the chairman of the board of the Dallas Symphony Orchestra. He consistently has a passion to see the classical arts presented in unique ways and embraced by a more diverse audience. He tasked his team, led by Mike Mayberry, with creating an experience that did exactly that. Mike reached out to us and Native Experiential to brainstorm what that could be. We presented a few options to Kim Noltemy at the DSO and the idea for Questlove’s Hip Hop Brunch was born out of that collaboration and those conversations.

LH: Tell us, what was the vision behind this project and why is this event important to you and for the city of Dallas?

Damany: Dallas has a VIBRANT cultural and artistic scene, with some of the best musicians and artists in the world. Every day, there’s amazing art being created, powerful music being written, and dynamic experiences being delivered to people in this city and, unfortunately, there are not as many people who know that as there should be. The vision behind this project was to bring to the forefront how dynamic that scene is and give Dallas an opportunity to be showcased on an international stage with the level of talent we already have here. That coupled with getting to support and work alongside amazing Non-Profits like Big Thought and Dallas Black Dance Theatre, made this one of the powerful and dynamic experiences I’ve had the privilege of being a part of.

LH: What would your advice be to up and coming artists here in Dallas?

Damany: Find a community and get plugged in. This show only happened because of a network of diverse artists and creators who all rallied around one vision to create the experience that we all got to enjoy. Whether it’s the art created by Sly 5th Ave., Jeremy Biggers and JM Rizzi, how it was brought to life by Eric Trich and Alda Boyd, or how it was interpreted through light by Aaron Sanchez, this came together because artists collaborated and connected to create something greater than the sum of any of their individual parts. The community that exists in this city is powerful and the more artists lean into it, the stronger that community becomes and the more powerful the experiences that we’re all a part of become.

LH: Tell us about some of your upcoming projects.

Damany: We’re producing the Visit Dallas Annual Meeting next month and, again, bringing in the Dallas arts and culture scene through a number of exciting and surprising experiences. It’s a great opportunity to see how well Dallas has done as a center for tourism and hospitality in spite of the past two years that we’ve all experienced.

This is also our 10th anniversary, so we’ll be announcing some really powerful stuff that we’re doing in the latter part of the year that people WILL want to be a part of. I can’t say a lot now, but we’re planning something pretty fun.

LH: Is there anything else you would like to say in closing to The Dallas Weekly audience?

Damany: Be proud of where we live. There’s a lot still to do to make Dallas as equitable an artistic place as some other cities, but there’s work being done. There are people waking up every day who fight to make Dallas more artistic and beautiful, and we should all learn about and celebrate their work. Find the artists in your community and support them. Period.

I also had the honor of speaking with one of the visual artists from this amazing production, Jeremy Biggers.

LH: Hey Jeremy! Tell us why this event is important to you and for the city of Dallas?

Jeremy: I think Dallas is a world class city and being part of things like this that have never been done before lay foundation for whatever comes next. This event is a full circle moment for me being a fan of Hip-Hop my first ever concert was a Roots show at the Prophet Bar in Deep Ellum, so being part of a show with Questlove is a dream come true.

LH: If you could speak to the starving artist inside of you what would you say?

Jeremy: Like many people who grew up where I did in South Dallas, I never saw art and I definitely didn’t think it was a viable career path. Working on the projects I have in the last few years are definitely things that FAR exceed my wildest dreams. Even as short as 5 years ago, if you would have told me I would be here today I wouldn’t believe you. It was always a goal, but if I’m being honest I didn’t see a path to achieve it.

LH: What is your favorite come-up story that you experienced at the beginning of your career?

Jeremy: My come up story is still being written. I’ve achieved some really cool things but I’m still going! I work on being as present as possible and recognizing that I’m currently living things I hoped for a few short years ago, but I still have so much more I want to achieve before I call it quits.

LH: What is the driving inspiration behind your art and who were some of your role models along your journey?

Jeremy: I’m inspired by life in its many facets. Like most artists, I’m inspired by art, but I’m also inspired by conversations with loved ones, and music, movies, books, and social media. The work I make right now specifically speaks to Black American identity through a male lens. A number of my recent bodies of work deal with creating work that I wish I saw in supposed “prestigious spaces”.

LH: What would your advice be to up and coming artists here in Dallas?

Jeremy: The biggest thing I always tell people is “There are no rules. Every single person, even the ones who position themselves as “experts”, are making it up as they go.” No one has it figured it. So just make the work you are most proud of and want to make more of.

LH: Anything else you would like to say in closing to The Dallas Weekly audience?

Jeremy: Dallas Weekly has always had a special place in my heart as a kid who grew up in South Dallas, and will be forever tied to my story because they are also who gave me my first public mural opportunity, and I wouldn’t be where I am today had it not been for that very first one. So if I’ve never said it publicly, thank you Dallas Weekly! 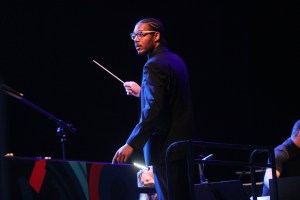 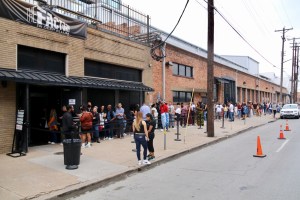 All photos were captured by Rayford Johnson.

Jewish Texans See Rise in Antisemitism as a Precursor to Fascism

Jewish Texans See Rise in Antisemitism as a Precursor to Fascism

By Robert Downen Extremism experts and historians sound alarms as

The Caliber Brunch, held on November 12 at STIRR Addison