In sports, a rebuilding year is described as a time when a team or player undergoes changes and works to build back up to where they were. After several replacement coaches, three team names, player transfers and additions, fifth grader Maiya Carrington feels her team is finally transforming to a winning squad.

During the Fall and Winter seasons, the Yetis were easily considered the underdog with a 0-8 record. Now, at 6-5-2, the team is shaping up and building momentum.

“We were so bad last year. Many of the girls on my team decided to leave because we were losing all the time,” the 11-year-old said. “But we did our best to still push forward.”

Pushing forward meant lengthier practices, more cardio, extra attention to footwork, and dedication to show up with a winning attitude — every time.

As a Forward, Carrington is tasked with playing closest to the opponent’s goal with the mission to score as often as possible. With added practice sessions to improve ball handling, ball control and footwork, she feels she’s in a pretty good place. She admitted to being a timid and gentle player with a power kick. 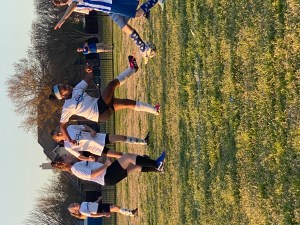 “Sometimes I get in my head about things, wanting to make sure I don’t get hit with the ball or kicked in the shins, but when I get in the zone I’m there,” she said. “My dad always tells me to get mad and get in the game, and that’s what I try to do.”

Carrington averages about a point per game and intends to increase to three. Her new coach pushes her to be more aggressive and urges her and her teammates to be more vocal with one another during the game — encouraging teamwork and developing camaraderie.

The added pressure is paying off. The team is working better together, communicating more on the field, and Carrington is increasing her confidence with handling the ball. 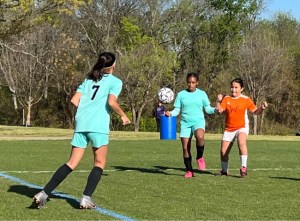 “Most games, I’m always so focused on just scoring. Lately, I’ve been studying my opponents and making sure that I’m moving with the ball and being in the right place at the right time,” she stated.

The insistence on being successful is what will continue to motivate Carrington to progress and grow along with her teammates in the winning direction.

You can continue to follow Maiya Carrington as she navigates her successes on the soccer field on Oowee Sports Nation, a network for youth athletes.

Texas’ Education System: How It Keeps You In The Dark