There are some children who dream of becoming an astronaut or doctor. Then, there are others who dream of something different — a future in sports. For seven-year-old Liam Johnson, there are at least two: playing in Major League Soccer or in the National Football League. As an infant, his parents instilled joy in learning about sports — attending every home game and cheering for the Washington Commanders (formerly Washington Redskins) at FedEx field in Landover, Maryland.

Many athletes thrive at sports when introduced at a young age. Johnson joined his first soccer team when he was three. In addition to soccer, he began playing flag football for the Jaguars at age five (in all positions), which led to an undefeated season. Dominating in both offense and defense, he has already been a part of the Columbia Sports League, Maryland i9 Sports, Prosper i9, and now the Town of Prosper Soccer for his team the Sparks in the current season. He will begin tackle football in the Fall. 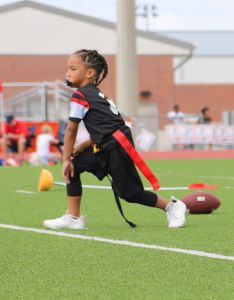 Johnson’s father, CJ, is no stranger to the field. He was a multi-sport athlete in his youth and fosters a household that places sports as a staple. CJ works daily with his son on fundamentals — running routes and practicing. Through sports, the younger Johnson has learned important lifelong lessons early-on, such as sportsmanship, helping others and apologizing after making a mistake.

“It’s really not always about natural ability,” CJ said. “[Sports] teaches Liam teamwork. It’s about working towards a goal, too.”

The Johnsons believe real talent comes after putting in work. The family started with soccer because it encompasses techniques from all sports and has easier rules to understand. They believe it will create a natural segue into other sports as he matures as an athlete. 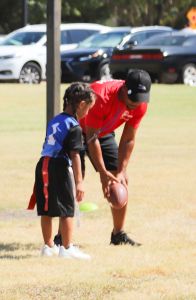 When asked by his dad ‘what’s the most important thing [he] has learned from sports’ and ‘who is someone that he looks up to’, Johnson stated, “I remember you said to always have fun.” He also shared that he looks up to professional English League Football player Cristiano Ronaldo.

On the sidelines, you can find his mother, father, and little sister as constant support. Outside of sports, he enjoys camping, video games, and hanging out with family. He says if sports doesn’t work out, he wouldn’t mind being a police officer.

You can continue to follow Liam Johnson and his athletic endeavors on Oowee Sports Nation, a network for youth athletes.

Tackle Tomorrow provides reading coaches that bring many years of

EMERGE – A Fashion & Music Experience – Makes Its Return This Spring

Matthew Knowles, Anita Hawkins, David C. Williams and Many Others to be recognized at the ‘You Can Live Again’