When we think about music and Dallas respectively, preferably South Dallas, how can we not think of the Queen of Neo-Soul, Songwriter, Mother, Midwife, and Doula, and she wears other hats as well, Ms. Erykah Badu? If you’re a fan like I am, then you already knew who I was talking about. Of course, we could not celebrate Black Music Month without the icon.

Hopefully, you checked out our previous story about Ms. Badu back in our February issue, but this time, I had the pleasure and blessing of chatting with Ms. Badu( I already internally fainted) about how her music has influenced musical history. And we’re not just talking about South Dallas y’all. Ms. Badu is an icon around the world and is recognized as such.

To say that I enjoyed our chat is completely an understatement. I associate it with talking to a friend, who is soft-spoken, yet firm, intentional, full of resonance, down to earth, and open to discussion. But what else would you expect from this beauty and amazing spirit? She is the ERYKAH BADU, never replicated or duplicated. 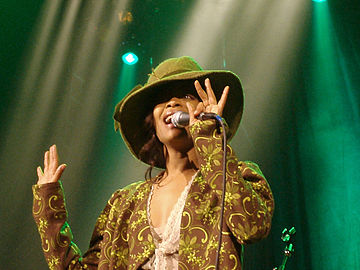 When asked how her music has evolved over the years, Badu stresses that her music is a part of her.

She is her music. It’s a package deal. So, any personal growth over time has been reflected in her musical offerings. With that being said, she doesn’t put out music simply to put out music, but everything is done organically.

We can all remember her hit single “On and On”. If you were around back then, you recognized that Badu stood out from the rest. While most of the music videos were synonymous with doing the same thing, we hadn’t seen anything like her video at that time. She set the precedent, truly, unapologetically herself, creating her Baduizm movement and we all took a breath.

The way that Badu was introduced to music was through her parents. It’s all in the family folks.

“I learned a lot through my parents, and the drums. And this is what helped me to develop my sound,” Badu says.

Yes, the sound we all know and love and can’t get enough of. When we hear songs like Tyrone or Bag Lady, we’re getting out of our seats and declaring how lame Tyrone is and how we’re dropping those heavy bags. I know you get it.

I wanted to know if it was easy for her to be so raw and transparent in her music for the world.

In a nutshell, her music is up for devouring by her fans, while it’s helping her. Beautiful!

And how can you not love the transparency she brings in musical form, in turn, therapy for your ears? Ahhh…

In the generation that we live in, we need to have a voice as our ancestors’ voices were essentially muted, especially our matriarchs. I was curious about if Badu had ever had to stand up for herself.

Essentially, she stood up for herself to open up a show for D’Angelo, under then-manager Kedar Massenburg, who was also manager of D’Angelo. She saw what she wanted, fought for it, and got it.

I wanted to know if it was humbling or stressful to be called one of the musical greats.

And I totally get this because that’s a lot on a person, even for something that she aimed for. It’s not something that you can sum up easily. But, we know it’s humbling because of how raw she comes across in her music, as we touched on earlier.

Back in the day, everyone tried to compare Badu and Jill Scott, and the ladies completely shut that down during the Jill Scott & Eryka Badu Verzuz in 2020. Erykah insists all was beautiful and a good time.

Okay, so about the fashion. The fashion is epic and stays epic. I had to know how the music and Badu’s fashion are connected.

And that ladies and gentlemen, she nails every time. The intricate rings, the layered bracelets, the hats, the henna, and the dreamy eyeshadows. You can’t duplicate or copy these looks. Her fashion is inspiring to say the least! They are one of a kind. Fresh is the word!

As one of Dallas’ pioneers, I wanted to know how Badu felt about the music currently coming out of Dallas.

Badu wanted to leave some inspiring words for the next generation that wants to get into music.

“Keep teaching us,” she says. Be on the lookout for upcoming tour dates with Ms. Badu, as well as an upcoming documentary she executive-produced about the late R&B/ Jazz trumpeter Great Roy Hargrove. I told you she wears a lot of hats earlier. Hargrove was synonymous with the Soulquarians, which included drummer Quest Love, bassist Pino Palladino, keyboardist James Poyser, and DJ/Producer J Dilla.

Hargrove was a major influence on Badu when she first met him in 1985 as a freshman at Booker T. Washington High School for the Performing and Visual Arts. He helped her develop a love for jazz. You can check out the documentary at the Tribeca Film Festival on June 12.

But let’s add another title to Badu. Comedian. Listen. Badu is hilarious in the best way. Have you peeped her IG? If you have not, do yourself a favor and check it out. You won’t be disappointed. And she owns the title comedian.

“I’m going to let you in on a little secret. Comedy is one of my first loves,” she says.

My chat with the Badu was amazing, raw, and real. It was a blessing to chat with her.

“We ain’t from the same cloth, cuz I’m cut