The classic musical Oklahoma!, written by Rodgers and Hammerstein in 1943, was a stirring, romantic and optimistic gift to Americans in the middle of World War II. Great songs, young love and the thrill of making a new life in the newest state energized the stylized hoedown dancing and heartfelt singing. 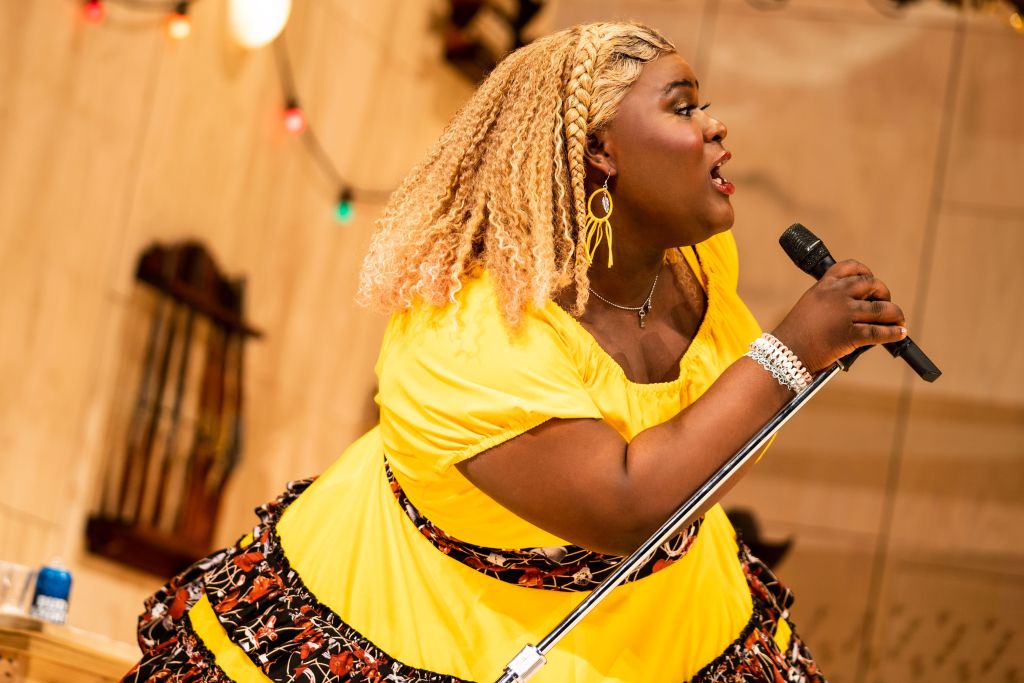 Times have changed.  Now a new, darker take on the famed musical tries to reflect our country’s ongoing turbulence – not just over gun violence – but gender equality and racial justice. For starters. Director Daniel Fish’s Oklahoma! has been the talk of musical theater for several years. His vision strips the show to its bones to allow the dialogue, music and lyrics to reflect a frontier tale of lust, jealousy and the fate of a disturbed outsider. The Broadway production won eight Tony Award nominations and the Tony Award for Best Musical revival in 2019.

Thanks to the touring production, brought to the Winspear Opera House by Broadway Dallas, we can see what all the clammer and shock is about.

There’s little scenery. Everything happens on a single set with a scrim of distant farmhouses across the rear of the stage. It’s maybe a community center with bright tinfoil decorations hung overhead, and some tables and chairs surrounded by packed gun racks on all sides. (The program insert warns that loudly amplified guns are fired 4 times during the show, that all guns are props, and that “no live ammunition is kept on site.” Whew.) Bud Light six-packs are on several tables. Props? The solid 7-member country/bluegrass band, conducted by Andy Collopy, sits down along the back wall, and the diverse cast files in wearing a blend of country western and honky-tonk chic. It’s already not your Grandma’s Oklahoma!, as many have written. 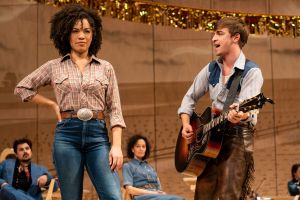 The Tony-winning production was in a smaller venue, with cornbread and chile served stage side. The opera house is a much less inclusive setting for the touring production, and certainly puts a strain on the orchestra and the whole pared-down intent to close the distance between them and us, then and now.

Right away, Curly (a cocky Sean Grandillo in crotch-defining leather chaps) grabs a guitar and starts singing “Oh, What a Beautiful Morning” to Aunt Eller (a wiry, good-humored Barbara Walsh). Nobody else smiles. The show’s on the road to a whole different vibe than the original. 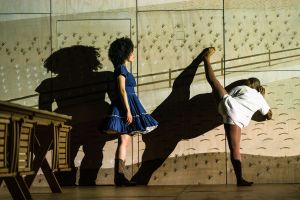 The romance between farm girl Laurey (a boldly sexual Sasha Hutchings wearing tight jeans and a tight, tough-girl smile) and full-of-himself Curly is playful for the brief interlude of “A Surrey with the Fringe on Top,” when he tries to get her to go along on his imaginary fancy ride. By the time we get to the second-act reprise of “People Will Say We’re in Love,’ the get-a-room lovers are slowly sliding their bodies together to the seductive twang of a steel guitar. Otherwise, the two have little chemistry onstage. Tall, glam Hitchings has a ringing soprano voice, but she also has those get-down honkytonk moves in her repertoire.

From the get-go we see the hired hand Jud Fry (a sensitive, please-touch-me Christopher Bannow) right on the stage looking at Laurey and seeing it all. No brute lustful giant, this Jud is almost pretty with a pageboy and the slow, deliberate speech associated with certain learning differences. When Laurey taunts Curly by saying she’s going to the box-lunch supper with Jud, the triangle turns venomous. Bizarrely, Curly sings “Pore Jud Is Daid” in a suggestive tone in a pitch-black auditorium, and we see their two faces projected large, and close enough to kiss each other. Now there’s some chemistry to play with during Pride Week.

The welcome comic relief of the show is in the all-out performance of black trans actor Sis, playing Ado Annie. She belts out “I Cain’t Say No”, in a voice that could reach the rafters in the big Winspear Opera House, even without amplification. Hennessey Winkler’s dim-witted Will Parker is engaging and funny singing about all the cool stuff in “Kansas City”. His true love Ado Annie easily lifts her amorous cowboy right off his feet in their comic duet.

I was disappointed in the dance overall. The hoedown looked ragged, and some cast members were not into it the night I saw the show.The Dream Ballet, danced by Jordon Wynn, that opens the second act, is also hardly the Freudian revelation talked about in program notes and early reviews. True, the dance looks very different here than the version I recall of the Agnes De Mille choreography representing Laurey’s romantic dream of love. The dancer shimmies convincingly in her sequined T-shirt, but otherwise the sequence is too noisy, too smokey and too long.

Fish’s vision doesn’t change the lyrics or dialogue. He does change Jed’s death in the last scene from an accident in a scuffle between Jud and Curly to an outright pistol shot. That sets up the final interpretation of the title song from jubilant newlyweds celebrating a new state with their family and friends to a blood-spattered nightmare scene, with Laurey in shock and everybody screaming the last line.

So. Is Oklahoma okay? No. Who is okay in today’s difficult world? That’s the question Fish wants us to leave the theater pondering. If you’d rather be singing “where the wind comes sweepin’ down the plains,” while you’re exiting the parking lot, then this show might not be for you.

Despite Apathy, Activists and Strategists Urge Black Voters Not to Sit out 2022 Midterms