One of the toughest lessons for an athlete to learn is sportsmanship — fairness and being a cheerful loser. Having a winning attitude not only shows growth, but also demonstrates honor. This lesson has been an especially hard one for West Mesquite High School sophomore Keyshaun McGee, who for the past four years has worked to sharpen and cultivate his skillset on the basketball court.

At the start of the pandemic, when many young athletes, including McGee, were removed or removed themselves from the routine of school sports, he spent his time building up his game by shooting around with his brother. Improving his ball handling and shooting skills has increased his ability to be an important contributor on his team.

“With putting in training hours on and off the court, I’ve developed a passion for doing my best,” the Wranglers shooting guard said. “So, when I make a mistake or take a loss, I tend to let my emotions get the best of me.”

McGee shared that there are other members of his team that have the same struggle, however, they do their best to encourage one another and learn to improve from their mistakes so they can move forward.

Looking up to Los Angeles Lakers point guard Russell Westbrook is what gives him inspiration to be better. Westbrook has established himself as one of the most athletic players in NBA history because of his capacity to play with a level of high intensity through the duration of his play time. 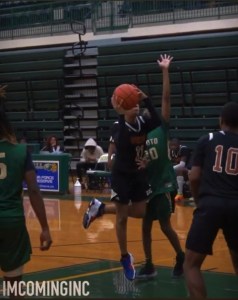 “Some of the best advice I’ve ever received in regards to playing sports is to play hard, or go home,” McGee said. “That’s why I feel it’s important for me to keep my head up and push through tough times.”

His current goal in the coming year is getting faster and bulking up, so he’s a more formidable opponent. He hopes to improve his ability to move quicker, drive down the court and set up offensive plays in order to visualize open shots and shoot well, every time.

Erica Loewe Helping to Open Doors for Black Press, Others at White House

The Experience of Black Motherhood

Texas’ Education System: How It Keeps You In The Dark

Erica Loewe Helping to Open Doors for Black Press, Others at White House

In Loewe’s all-too-important job as director of African American media,

The Experience of Black Motherhood

Are Black mothers being placed under a more intense lens

Inspiring Passion at the Ground Level