When you think of the Dallas music scene and you combine that with R&B, Neo-Soul, and Hip- Hop, you instantly think of The Erykah Badu, often called the “Queen of Neo-Soul”. And if you’re from Dallas or even reside in Dallas, it’s a joy to know that this amazing soul lives amongst us. Erykah is an integral part of our Black history as well as our Dallas History. How many times have you heard someone say,” You know she lives here right?” Don’t tell Tyrone though.

Born in the Triple D, Erykah essentially started awakening her talents at the age of four, singing and dancing at the Dallas Theater Center and The Black Academy of Arts and Letters under the guidance of her godmother, Gwen Hargrove. She later graduated from Booker T. Washington High School for the Performing and Visual Arts, and later chose to study theater at Grambling University. Though Theater Arts was something that she always loved, she decided to focus more on her musical talents.

It was a 19-song demo called Country Cousins, created while working and touring with her cousin, Robert “Free” Bradford that landed the attention of record producer Kedar Massenburg. We can go On&On about what happened in between, but this moment in time led to a duet called Your Precious Love with singer D’Angelo and she eventually signed with Universal Records.

Back in the Day, the 1990s that is, the music scene didn’t consist of anyone quite like Ms. Badu. Of course, you had many Black artists at your disposal but Didn’t Cha Know on a mass level, it was mostly alternative rock, heavy metal, pop-rock, and adult contemporary. If you wanted to feel seen or heard, you ran to BET for some good grooves and Donnie with the light eyes, Donnie Simpson. You know, folks that looked like you. It didn’t matter if it was rap or R&B, it was your escape. It was relatable. So, yes, we saw us, but when Erykah emerged onto the scene in 1997 with her debut album Baduizm, she was in a class of her own. 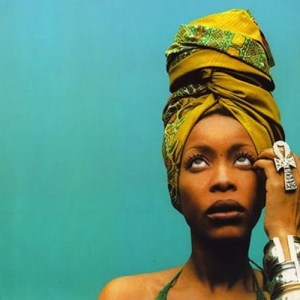 She had a style that we had never seen before or perhaps failed to see what was already us, and she was a bold reminder to embrace our culture differently. Though wearing a head wrap is pretty common now, seeing Erykah wear one was a game-changer, especially during a time when it was all about hairstyles like finger waves, swooped bangs or the pixie cut. Also, music videos were all about the bling-bling, rappers, and singers surrounded by video vixens, dance sequences, and yeah, lots of shiny stuff. It seemed like the foil-like shine never stopped, but again, Erykah was in a class of her own, unapologetically, almost before her time, but right on time.

Let’s get back to the music. From her debut album Baduizm, her lead single “On & On which was released in 1996 reached number 12 on the Billboard Hot 100, which led to an amazing nomination and win at the Grammy Awards, where the single won Best Female R&B Vocal Performance and the album won Best R&B Album.

Erykah recorded her first live album, Live in 1997 which reached number one on the US Billboard Top R&B/Hip-Hop Albums. Its lead single Tyrone, an anthem that most of us know word for word became another R&B hit single. It’s a song women will vent loudly for generations to come. It never gets old. It’s powerful. It does that thang.

Erykah has also been featured on many songs with artists like The Roots, Eve, Common OutKast, Jill Scott, and many more. She went on to produce more albums, Mama’s Gun, produced by the Soulquarians and noted bassist Pino Palladino, with the notable Bag Lady, Worldwide Underground, New Amerykah Part One, New Amerykah Part Two, Window Seat. 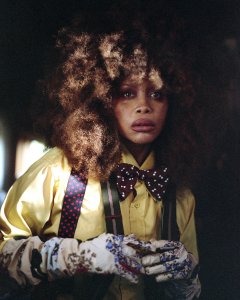 In 2015, Badu released a remix of Drake’s single Hotline Bling and later released a mixtape, But You Caint Use My Phone through Apple Music. After one week, it was released to other digital retailers and streaming services. This marked Badu’s first release under her own record label Control Freaq.

Not only is Erykah one of the most notable singers of our time, she’s also an actress, starring as Turquoise in the film The Land, in which she also released a title track of the same name featuring rapper Nas. She’s also a three-time host of the Soul Train Music Awards.

If you are lucky, you can look forward to scoring some tickets to her annual Birthday Bash Concert, which draws in people from all over the world.

At times when the music scene, seems a bit underground in Dallas, Erykah has set some major precedents in Dallas when it comes to music.

Singer. Mother. Actress. Spiritual Maven. Host. Midwife. We are happy that Ms. Badu lives amongst us.