When your dad is a former NFL player, it just makes sense you’d follow in his footsteps (or try). Sporting the same cool demeanor, athletic ability and No. 21 like his dad, nine-year-old Jabril Talib is well-positioned to do just that.

As a cornerback and running back for the North Dallas United Bobcats, the fourth grader is honing his skills on both sides of the field (defense and offense) with his former pro player turned broadcaster dad, Aqib Talib guiding him as a team coach. 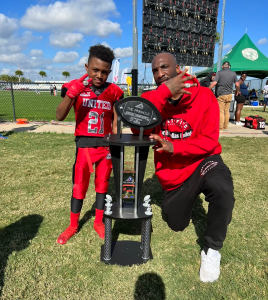 “Football has been a big thing in my life for as long as I remember because of my dad,” he shared. “He is of course my inspiration, and I like having him as my coach.”

NDU Bobcat Coach Tevar Watson shared that having a pro player/father figure such as Aqib as a team coach has proven beyond instrumental (not just for the younger Talib) for all the kids.

“Any time you have a father in your life, it’s a bonus for our little black boys,” Watson said. “Imagine having a father that not only knows what it takes to make it to the highest level, but has already been there.”

Talib said one of the most important things his dad has instilled in him is that he is his own biggest competitor and if he works hard like everything depends on him, he will always put forth his best. 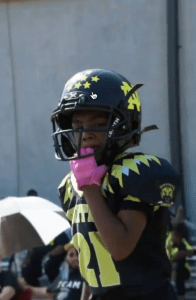 His best resulted in a 9-1 season for his team last year as Big 12 Youth Sports League Champs and carried them to Bradenton, Florida to compete in the Sports Illustrated-sponsored Pinnacle National Youth Football Championship. They took home the gold as 8U National Champions.

For the upcoming 2022 season, Talib’s goals are set on a repeat championship win and increasing his interception count from one to four. His current stats sit at 10 touchdowns, two force fumbles and one interception ⏤ he has also been previously named NDU Offensive Player of the Year. 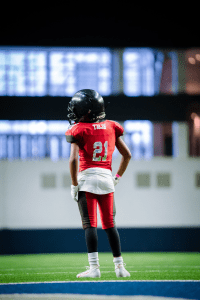 With aspirations of continuing football in college ⏤ University of Florida, Baylor University and Ohio State University are his top picks.

Follow Jabril Talib on Oowee Sports Nation (a network for youth athletes) as he works to follow the path his dad has charted for him to reach the top.

Toxic Positivity: When Is It too Much?